There is a little Interference Noise from the volume control on this unit; only when it is being turned around, and in a certain position this happens, I have tried once giving it a good spray of Kontakt Chemie: Kontakt 60 and a few days later a good spray of Kontakt WL and turning the knob after each spray to move the spray around inside.
https://drive.google.com/file/d/1BjdC99 ... sp=sharing

I have uploaded a two old photos showing the rear of this control although one of them is the balance control; there is access for spraying on the side and maybe from the centre of the end and info on Kontakt Chemie. There will be carbon tracks inside this control; so an IPA is not recommended for this at all, it would washout any lubrication that is already there, the IPA will only destroy the carbon.
The KONTAKT 61 is a cleaner with a lubricant; which I already have, I have tried injecting a small spray amount through the side access entry as well as from the end of this control then turn the knob fully both ways for several times to move the spray around inside, then apply a little push pressure on the knob whilst turning followed be a little pull pressure.

I fitted a piece of paper towel around the control to catch any over-spray and used an absorbent clean cloth to remove excess spray from the external parts; I left it for an hour before switching on the unit to test.

Doing this hasn’t made any difference at all, apart from, when I turn the volume knob it feels more firm, less looseness, so on that side there is an improvement.

Please can you give further suggestions, thank you. 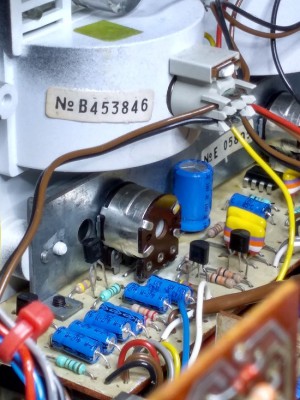 IPA (Iso Propyl Alcohol) won't destruct carbon at all. It is a neutral de-greaser and used in all semi-conductor industry.

Philips Service Manual; gives reference points for voltage readings shown on the Main board U405 drawing and the schematic diagram (bottom right). Note some of these references are quite precise to the point of a volt, giving the impression that they are important!

Shown below; readings in red are the reference voltage followed with the actual voltage in black.

Zener Single Diodes voltage regulators
Have now replaced all Zener voltage regulators on this unit the readings are set out in the usual way below, first reading across, second readings to ground, anode (A) side first followed with cathode.

Is there a reason (symptoms, performance) to suspect the voltages are too far out?
Omhoog

No symptoms or performance issues; just wondered if these voltages are acceptable

The new 12 volt regulator IC431 on board U402 power supply may not be an exact 12v?
Kind Regards Michael
Heating & Electrical Engineer
Omhoog

There is a Word document (this allows you to edit) and a PDF both having the same contents that anyone wishes to have a copy; they list all the Electrolytic Capacitors and Transistors.

This is the link to the folder https://drive.google.com/drive/folders/ ... sp=sharing

This link you can see the cassette player playing; the recording on this cassette was re- recorded in the 1980’s hence the second recording did not fully overwrite the first recording, I think this was done because the recording was a little poor.

To get the optimum recording; preparation is required by making sure the tape heads are clean hand wind the tape forward to clear the transparent tape, insert and press only the REC button, set the player going with the LP or CD that you are going to take a recording of and make sure that the monitor switch is set to position “Source”;

Then bring up both recording level controls so that the peak indicator +4dB is just starting to blink; both meters should just reach the red areas of the scale. (if you look at my left channel of the recording in this post the level meter it is a little lower than the right, the left level should have been a little higher, so it is better to have both levels reaching the same).
Some tracks when played workup to a grand finale which is higher/louder in this case it is better to play the track through, this gives a chance to alter the level controls, we call this setting up, to achieve clarity on the recording, after you are happy with the levels, then start your recording from the beginning. 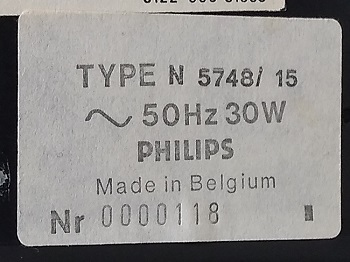 Cleaning the tape heads; you will need methylated spirits (meth’s), I have a nice smallish glass bottle to store mine, cotton buds 3" inch (75mm) long or longer would be better because access is limited due to the cassette holder being partly in the way and if you have large hands, even more so and kindly ask for a pair of your wife’s white cotton which is usually lint free pants all very important.

Using one cotton bud dip on end in the meth’s and gently polish/wet all of the top of the 2 heads (2 heads in 1 = 3 heads in total) the right-hand head has a depression near where the two heads meet, clean this part also going inline, on this part for about 20 seconds in total; then use the wet end of the bud and place it centrally inside the gusset of the pants, keeping it quite tight, gathering all the loose material and holding it with your last 3 three fingers in your palm leaving your thumb and index finger to hold the covered bud which should be wet from the remaining meth’s and be very gentle, polish up the heads again for 20/30 seconds in total.

Use the other end of the cotton bud which is dry and place it centrally inside the gusset of the pants over a dry area not soaked in meth’s and holding it as before, polish up the heads again for 10 seconds in total. If you then avoid placing a cassette in for 5 minutes, to be sure the heads are completely dry.

Note; if you play a cassette for a few seconds and mentally listen before cleaning you might be very surprised at the results of the cleaning, even if the heads look clean. Twin Tape Head; as this is a magnified view, one might think something is wrong here?